An “invisible” virus. After the public-health shock, a protracted financial crisis leaves many people behind, trust in government and institutions crumbles, and national identities fracture more. The collapse of civilization, what would it take today?
The global threat landscape changed dramatically with China and Iran threatening the US homeland

LIVE THREATS - INVISIBLE ENEMIES
PHASE II:
Coronavirus Crisis – Fear-Based Narrative
China - Economic and Bio Warfare
Space Warfare - Satellites
Iran threatens US from space
“Microwaves From The Sky”  – Nuclear EMP –
Rebellions – Coup D'états - Terrorism
The global threat landscape changed dramatically with China and Iran threatening the US homeland.
An “invisible” virus contagion curve is flattening, but real unemployment and business bankruptcy curves remain on the rise. The economic system, monetary architecture and supply chain are stressed by hampering consumption. After the public-health shock, a protracted financial crisis leaves many people behind, trust in government and institutions crumbles, and national identities fracture more.
The collapse of civilization, what would it take today? 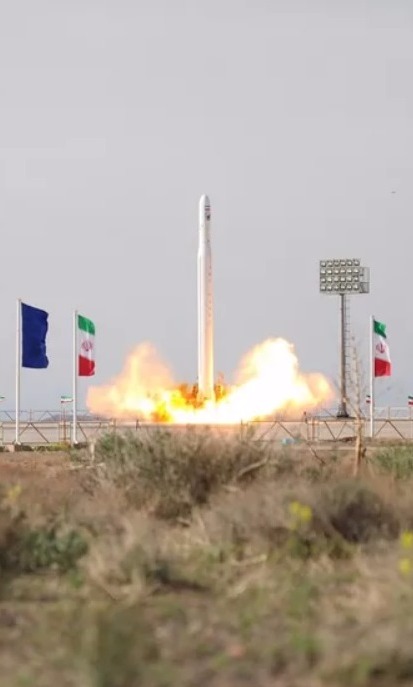 Phase I Coronavirus threat narrative
“Established Presence and Fear”
on a global scale.

1.1 Phase I Generic:
effective 'guerrilla marketing' by killing indiscriminate and at random (Covid19) to effectively establish presence and fear.

Without burning too much sunlight, it generated a permanent position in the threat landscape.

Starting May 2020, on autopilot, it is on track to shock economies a century back in time and destroy public trust in government institutions, causing levels of – imminent Rebellions,  Anarchy and Terrorism.

In its pursuit of world domination, China’s intermediate goal is to weaken its opponents and change the global balance of power. Which they do by supporting proxies, the usual suspects like Iran and, more recently, by allowing the spread of the coronavirus.

China considers Europe the weak link of the West, vulnerable to Russian expansion politics and the wars in the Middle East and Africa. China expects Europe to be neutral in the conflict between China and the US

Ongoing intelligence, AML operations, surveillance and counter surveillance of travel patterns between 2016 and 2019, revealed Trade Based Money Laundering, facilitators and support for Iran to receive significant support for its missile program, enabling it to launch a military satellite and become a severe threat to the United States Homeland. An imminent threat to world peace!

The threat by Iran on the US homeland will be countered and boomerang back into the Middle East. However, initially, it brings Iran the long-sought esteem as the leader of the Muslim world.

2020 CRISIS PHASE II - is to peak, and establish a manifest presence by July.

Targets are wide spread including the EU and the US. Perpetrators expect the public to look at the sky. Disruption attempts are underway.

The current planning and timelines of the different movements have in common:

- They expect Fear and Presence already established and the public in emergency mode.
- That before July (Estimated for weeks two and three of June – calculated on June 13, 2020), it becomes apparent that government services in their target countries (areas) cease to exist. A preferred moment to get mass public support for terror attacks, Coup D'états, and civil (war) disobedience.

The (century-old) dreams of left and right-wing extremists in Italy, and Spain are to grow their base exponentially when continuity of government crumbles. Such long term narratives befit most countries.

Even in the United States, government continuity is at risk within months!

Government services cease to exist In the emerging economies (not limited to!), Venezuela, Argentina, and Ukraine allowing for military, organized crime, neighboring countries, and political extremists to stage a coup.

Something that terror organizations could not achieve, Fear and Presence, is established by the corona and financial crisis. The public is in Emergency Mode, and government services cease to exist in large parts of Turkey.

NOOR-01, the first military satellite of the Islamic Republic of Iran, was launched into low Earth orbit (425 km high) by the two-stage Qassid launch vehicle of the Islamic Revolutionary Guard Corps. Launched from a mobile rocket launcher in the central desert of Iran. The rocket combined liquid and solid fuel stages

Iranian IRGC officials said the NOOR-01 is a multi-functional satellite, which also has a defense mission.

“Microwaves From The Sky”

If a nuclear weapon is exploded in a vacuum, i.e., in space, the effects of the weapon change drastically:

1. In the absence of an atmosphere, the blast disappears.
2. Thermal radiation, as usually defined, disappears.
3. The weapon emits much higher frequency radiation.

It is causing damage to high-frequency communication links, similar to the effects produced by a coronal mass ejection and solar flares. EMP

Market circumstances influence the production of solid fuel and the availability of crushing and mixing machines commonly used in the mining industry — a powerful industrial planetary mixer used in the creation of solid-state fuel.

1. The American bombing in the Nangarhar Province of eastern Afghanistan, near the border with Pakistan. On April 13, 2017, the United States conducted an airstrike. It used the giant non-nuclear bomb in its arsenal, the Massive Ordnance Air Blast (MOAB), to destroy tunnel complexes used by the Islamic State of Iraq and the Levant – Khorasan Province, a branch of ISIL – ISIS. As a result, materials that generally need intensive mining operations are lying around on the surface for free. The Taliban immediately claimed that mining of talc in that area and production of talc powder was theirs to keep.

2. in 2018, Johnson & Johnson was ordered to pay $4.7bn damages in the talc cancer case, followed by the biggest buyers of talc powder, the health, and the beauty industry, first recalling products with talc powder and then stopped using it in their consumer products.

The demand for talc powder plunged, production of mixers, and crushing machines became less profitable. And today, the global market for these special mixers and crushers is for a significant part controlled by low-cost Chinese companies.

“Powerful planetary mixer used for the creation of solid-state fuel is said to have been destroyed in a drone explosion; was reportedly flown in from Iran.”

That might be, but we know it was made and sold by a Chinese company.

Ultrascan HUMINT confirmed that the bunker, which stored the fuel, is part of a missile conversion infrastructure.

The loud explosion, triggered by fire and small bursts at a nearby building, caused a mushroom cloud and a shock wave over the city, followed by multicolor toxic clouds that indicate chemicals continue to burn.

When the solid fuel propellant (ammonium nitrate) exceeded 380 degrees C, (716 F) the area combusts, and the blast registers an earthquake on the Richter scale, hundreds of miles away.

The collapse of civilization, what would it take today?

The combination of 1,2,3 is system destruction, the possible collapse of civilization over a period!

Flatten the curve of COVID-19 infections during months with high temperatures and fresh air, is a given. Until colder months arrive and people again seek conditions of lower temperatures with a below-average humidity.

CoronaVirus Threat – Why The Endless Replay of Failures?

All governments made the same credible promises, and even though nobody asked them, they assured the public specifically to search for scientifically proven solutions. Therefore they placed the (live terror-) threat in the hands of expert scientist taskforces. These academics said that if we abide by specific extreme measures, then we avoid the consequences calculated by computer models, based on the incomplete set of data supplemented with rational choice probabilities.

Reassuring The Public With Science

Except that scientists do not guarantee the outcome of the measures they propose. If faced with a death threat and possibly the collapse of civilization, there isn’t a lot of difference between a nine-year-old and taskforce scientists.

Nevertheless, around the world, scientific Corona taskforces miraculously came up with the same extreme measures of a nine years old afraid for infection: Don’t meet, stay home, don’t touch, and wash your hands.

How did we all get in this endless replay of a bad movie?

All governments had the same revolving problems, with protective clothing, masks, ventilators, IC beds, and wrong Covid19 tests. All hospitals eventually used the same lists identifying Covid19 patients based on symptoms initially identified by Chinese doctors. (similar to the flu) Of course, there is negligence, like the incorrect placed ET tubes that cause pneumonia. But first, it is corrupt data leads to wrong medical protocols and misguided treatment.

Doctors everywhere are all over the fact that their treatment with ventilators doesn’t work, worsened the intake of oxygen and kills patients.

In all countries, the same things went wrong. Disbelieve fueled by the government’s lack of transparency and obvious repetition of mistakes turned into distrust. The public sees a government pushing extreme actions based on assumptions led by the tunnel vision of the extremely conservative virus-threat expert task force. The drastic measures are biased and affect every one of us differently, feeding insecurity, fear, and inequality. Divide and conquer, an opportunity for enemies and extremists.

“To task scientists with solving an imminent or ongoing terror threat guarantees failure.”